Skip to primary content
Skip to secondary content
I have been doing quite a bit of driving around our beautiful country lately and I have been shocked at some of the images I have seen over the last week.  This first pic is an indication of how beautiful our country is, but is unfortunately not the pretty picture I have been seeing just recently. 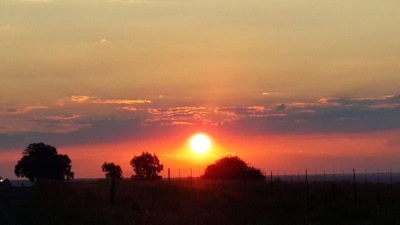 We are nearing our elections in South Africa, taking place on the 7th of May and we are celebrating 20 years of democracy.  This is the first election taking place where those who are “born free” (those whose lives began after apartheid) are eligible to vote for the very first time. One would think this is a major milestone for every young adult.

Our own Archbishop Desmond Tutu has welcomed the “Vote No” campaign – a campaign started by our former intelligence minister Ronnie Kasrils and other ex-ANC members encouraging “South Africans to be aware of the value and consequences of their vote.”

This new generation has no memory of the apartheid era and have no loyalties to the ANC.  They feel they have been let down by their own government.  Most are well educated and despite this are unable to find suitable jobs.  Instead they are witness to the corruption taking place and the inability of our government to identify with its people.

I am in support of those who make the effort to protest against poor service delivery but I am shocked at the total lack of respect my fellow South Africans have for other people’s property.  Driving back from one of our mines yesterday, we were diverted and had to use an alternative route and we were witness to the destruction caused by one of these protests.

We were left with a picture of total destruction in our path – vehicles being stoned and trucks being burnt.    Our roads marked by black residue from burnt tires.

Are we perhaps heading for a civil war?  Do I Want to sit back and let this beautiful country be destroyed by those who should be protecting it?

I don’t typically talk about politics on my blog.  The main reason is that my blog is supposed to be about me and my journey in finding myself and the challenges I face.  And I have always felt that writing about politics and matters of the state make it about everyone else.  But this is where I have come to the realisation that talking about politics is very much about me too – not only does politics and legislation have a huge impact on my life, it is my opinion that counts too.  So it is time I started being a little more verbal about some of these issues.

I would like to quote Plato here and this forms the theme of this post and many more just like it:
“Those who are too smart to engage in politics are punished by being governed by their inferiors.”

Now where to start.  Quite honestly this could turn out to be a long post but I will try to keep it short and keep to the facts as I see them and perhaps it will be the first of many such posts.

The first issue I want to address is our new toll roads – or eTolls as they are called here.  This has been a 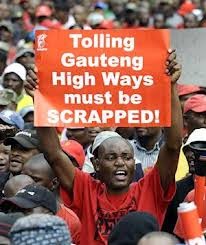 very controversial subject here since we hosted the World Cup in 2010.  Besides the white elephant stadiums that we are left with (another legacy of the World Cup), we are also left with having to fund the upgrading of our national highways in Gauteng.

Now I know you are probably thinking why are we bitching about the upgrading of our national highways.  It is not the upgrading of our national highways that we are bitching about – we are bitching about the fact the tax payer has to pay a toll to drive on these roads.  These are roads we have always driven on at no cost (or direct costs as the case may be).  They didn’t build new ones, they merely fixed existing ones and added a new lane here and there.  We, the tax payer has already paid for the capital costs of these roads.  And it is due to neglect and the lack of maintenance that these upgrades were required in the first place.   Not to mention the fact that we pay a small fortune for petrol in our country which is loaded with various taxes and levies which are supposed to cover the cost of maintaining and improving our roads.  I’m not sure what you all pay for petrol but we currently pay over R14 a litre for ours (about US$1.5 per litre) (Refer to Worldwide Retail Prices of Gasoline  here (US cents per litre)

I have also been told that part of the agreement with FIFA was that we were required to provide highways with a minimum of 4 lanes to the stadiums and the airport and other such relevant routes if we were to host the World Cup.  They didn’t care what the cost of this was or if we actually needed more lanes.

So SANRAL (our national roads agency) put out a tender for the upgrading of these roads.  Another huge controversial issue as the tender and subsequent business plan is flawed in many ways.  The tender was awarded to a non-resident company, so much of the money raised actually finds its way out of the country.  But besides that, the installation consists of elaborate gantries and inefficient means of collecting the tolls.  I’m not going to quote facts a figures here as these are freely available on the web and I will post a few links at the end of this post for those of you who want more information.

We do not have a public transport system and there are also no viable alternative routes so we are forced to use the tolled highways now.   This has put huge financial pressure on the average tax payer who has to get to work or get around on a day to day basis.

One of the big issues for me is that you have to register to use these roads and you are offered “reduced rates” if you register and pre-pay for the usage of these roads.  I feel this is discrimination at it’s best and I am so fed up with being discriminated against in various ways (a topic for another post).  I will have to register to take advantage of special rates and I have to have a little electronic device in my vehicle.

According to various articles I have read recently, up to 90% of people who use these tolled roads have a) not registered and b) not paid after receiving a bill in the post.  I am not quite sure how they intend to recover this money as they cannot prosecute everyone concerned.  I am currently part of the 90%.

I have not registered either and have received many bills in the mail.  I am very sensitive to my information being shared and would like to know how the administration company knows where to send the bills to if I have not registered.  I have certainly not given the licensing department permission to share my information with any third party companies and I feel strongly about my rights being compromised here.

Please read some of the articles below and share your thoughts on this issue.  I would be interested to know what you all think.